Last week on the Primally Inspired facebook page, I posted my breakfast of the day, which was this fruit souffle.

I’ve been eating some variation of a breakfast souffle a few times a week for the past few years, so I guess I was really surprised at the amount of attention and love the picture got. In fact, according to the higher powers on facebook, it was one of my most popular facebook posts that I’ve ever posted.

Woah! So I thought I should share the recipe on my website so more people could enjoy it.

Here’s the deal behind my breakfast souffles and why I love them so much:

Sometimes I get tired of eating eggs, eggs, and more eggs for breakfast, but the truth is, eggs are such an eggcellent (sorry, I couldn’t resist) and nutritious food to eat in the morning. The high protein and good, healthy fat in the eggs keep me fueled for hours. Plus eggs are a powerhouse of vitamins, minerals, omega 3 and other disease fighting nutrients like lutein and zeaxanthin, which reduce the risk of age related macular degeneration. Eggs are one of the few foods that also contain a lot of the essential nutrient, choline, which most Americans are lacking in their diet. Choline is wonderful for brain development and memory. Pregnant and nursing women should especially be consuming foods with choline because it supports the fetus’s developing nervous system and greatly reduces the risk of neural tube defects and premature birth. I could go on and on about the greatness of the egg, but you get the point – they’re pretty much awesome.

That is why I love this breakfast! It’s made almost entirely of eggs, but it doesn’t taste like I’m eating eggs at all. Weird I know, but just trust me on this. It tastes like a pancake! In fact, my picky little nieces even call it a fruit pancake and it’s one of their favorite things to eat.

The recipe below is a nice base recipe and the one I use the most. You can see some of my other yummy different variations of souffles here.

Lately I’ve been sticking with cinnamon as my spice and using frozen strawberries as my fruit. But I often change out the fruit according to what’s in season or what I have in my freezer from last summer.

I really enjoy experimenting with this recipe and I encourage you to get creative with the fruit combination and/or spices and see what kind of yummy concoctions you can come up with. And let us know some of your favorites by leaving a comment so we can all try them, too!

4 – 5 eggs, room temperature works best and separate your whites and yolks (use 4 if your eggs are large or 5 if they are on the smaller side)

1 cup fruit, both fresh or frozen will work great

Put your coconut oil and fruit in the bottom of a pie pan or 2 large ramekins. If you are working with fresh fruit, slice it up before you add it to the dish. If it’s frozen, keep it whole and we’ll slice it up after it gets softer. Stick it in the oven while it’s preheating so the coconut oil melts and so the fruit gets soft.

Meanwhile, we’ll make the rest of the souffle.

Put your egg whites in a kitchen-aid or stand mixer (or hand held mixer) and whisk on high speed until peaks form. This will only take a few minutes.

While the whites are whipping, put your yolks in a separate bowl. Add in the maple syrup (or other sweetener), vanilla and cinnamon. Mix well. Set aside until the whites are finished whipping.

When the whites are finished whipping, add in the yolk mixture. Whisk for about 5 seconds more just until the yolk and white mixture is incorporated. It’s very important to not overmix it at this point. 5 seconds is plenty.

Take the pie dish with the fruit/coconut oil out of the oven. If your fruit was frozen, you can slice it easily now so slice it up in smaller pieces right in the dish.

Now pour your egg mixture into the pie dish/ramekins.

Bake for 16-20 minutes or until golden on top and done in the middle. Enjoy! 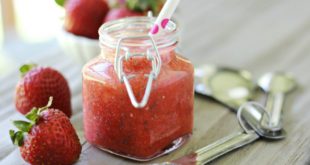