My wonderful, adorable and hilarious internet friend, Janice from HealthStyle Living, always gives me the nicest compliments about my no grains, no added sugar paleo banana bread. She raves about it all the time and said she was so happy to discover something she and her husband could enjoy while still staying healthy. I just love hearing things like that!

One of my favorite things to do is to experiment in the kitchen and take the typical “not so great for you foods” and make healthier options while still maintaining an amazing taste.

So when I caught wind that Janice was searching for a healthier no grain replacement for her husband’s favorite lemon bread, I couldn’t wait to take on the challenge.

Some of you may be familiar with the Starbucks lemon loaf: Delightfully lemony and delicious, but full of artificial ingredients, refined sugars and flour. This lemon bread tastes just like it, but this is full of wholesome, real, and good for you ingredients! Score!

Janice and I worked together for a long time on this recipe to get it absolutely perfect and we’re so excited to share with you the final version. We hope you love it as much as we do!

Author:
Kelly from Primally Inspired
Serves: Makes 1 loaf
Save Print
Paleo Lemon Bread with a Delicious Lemon Glaze
Ingredients
Paleo Lemon Loaf:
*Juice your 2 lemons and pour the lemon juice in a 1 cup measuring cup. Add enough milk to the lemon juice until you reach 1 cup.
Lemon Glaze:
Instructions
To make the lemon glaze:
Notes
If you do not feel like making the glaze, you can skip this step (although, I highly recommend taking the few extra minutes and making it – that glaze is soooooo good!). You just need to add the following glaze ingredients directly to the lemon bread mix: honey, lemon zest and juice, and vanilla.
3.2.2700 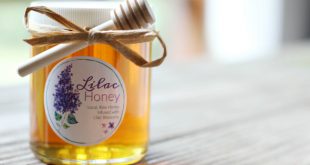 Now you can enjoy the smell & taste of lilacs all year long with this easy, delicious lilac honey recipe. Plus free printable labels for easy gift giving!